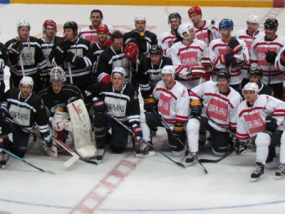 Thoughts on “Rock Out the Lockout”

I’m not going to try to do a blow-by-blow recap of Team White/Red’s 17-11 win over Team Black in the “Rock Out the Lockout” charity hockey game at Windsor’s WFCU Centre on Saturday night. Too many goals and I wasn’t keeping notes. I’m sure the Windsor Star’s Bob Duff will have something good to cover it.

You can’t take much away from a charity All-Star game, but since it’s the first chance to see some of the Red Wings on the ice since last April, I wanted to put some of my thoughts together.

Goalie Jimmy Howard looked pretty bad for Team Black. Yeah, the goalies aren’t going to look good in a game like this, but there were some softies that he was allowing that neither Jonas Gustavsson nor Michael Leighton were. Gustavsson’s lateral movement, in particular, looked really good.

Howard’s trouble might have been related to Niklas Kronwall and Jonathan Ericsson not being in front of him. The Team White (previously advertised as Team Red) defense pair was very solid all night, breaking up a lot of the too-fancy net mouth passes. They also moved the puck up to their offense pretty well (which put pressure on Howard).

That said, Ian White was jumping up into the play early and often for Team Black. He was one of the first players to really let loose with a shot from the high slot on a night where I don’t think I single one-timer was taken. While he held back on the one-timers, he had several chances to take a big shot and didn’t back down from the opportunity.

Darren Helm’s hands didn’t look any better than usual for Team Black. He had three chances in close that he couldn’t finish on. Shamless bragging: I won Helm’s stick in the silent auction, so maybe forcing him to get a new one will fix all his problems.

Similarly, Team White’s Mikael Samuelsson had at least three chances where he completely missed the net, including his shootout attempt. Some things never change, it would seem.

Some things do change. Both Justin Abdelkader and Cory Emmerton had a goal and an assist for Team White and Team Black, respectively. Emmerton didn’t look like he had a broken finger with some nice passing and Abdelkader was all over the place early in the game.

Johan Franzen scored the game’s opening goal for Team White on a nice chance from the slot but was pretty quiet overall.

Todd Bertuzzi played the Chris Chelios role, cherry-picking and generally looking like he was out to have fun more than worry about how he was playing. He collided with Kronwall in the first period and went straight to the bench, later calling it a Kronwalling.

Overall, the player who stood out to me wasn’t Kevin Westgarth of the Los Angeles Kings, who had a four-goal night for Team White. It was unrestricted free agent Sergei Samsonov, who seemed to be all over the place all game. He played like there were scouts in the stands, even if it didn’t show up on the scoresheet.

Of course, the outcome of the game and the way people played doesn’t really matter. The players presented a check for $10,000 to Windsor-based childhood cancer foundation Sparkles From Above before the game and all of the still-to-be-determined proceeds from the night will also go to the charity. While we all want to see these players playing in “games that matter” it’s fantastic to see them come together for a game that doesn’t matter but has an effect that does.