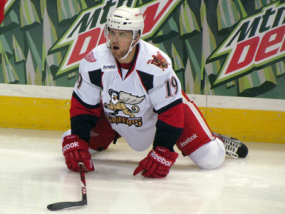 Sheahan was stopped going the wrong way on Ottawa Avenue, near Pearl Street, in Grand Rapids just before midnight on October 29.  He was recorded as having a blood-alcohol content of .17 – more than twice the legal limit.  He also gave officers false information.

In a November 6 hearing, Sheahan pled not guilty to the charges.

The twenty-year-old Sheahan was Detroit’s first selection in the 2010 NHL Entry Draft.  This is his first full professional season, having played seven games with the Griffins and one with the Red Wings to wrap up the 2011-12 campaign.

In 2010, during his freshman year at Notre Dame, Sheahan was charged with public intoxication and minor alcohol consumption.


To Canada and Back! : Running to Raise Money and Awareness for Special Hockey