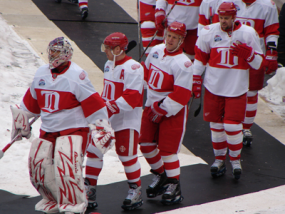 On the heels of the cancellation of the National Hockey League’s November schedule, one more significant cancellation is expected this week.

ESPN’s Katie Strang reports that, according to a source familiar with the NHL’s lockout plan, the “league is expected to cancel the Winter Classic on Thursday.”

Planning for this season’s edition of the Winter Classic, scheduled for January 1, 2013, at Ann Arbor’s Michigan Stadium between the Detroit Red Wings and Toronto Maple Leafs, would need to begin soon.  With the league and the NHL Players’ Association having broken off negotiations on a new collective bargaining agreement, it’s unknown when – or if – the season might begin.

If the 2013 Winter Classic is cancelled, it will take with it the Hockeytown Winter Festival scheduled for the final weeks of 2012 at Comerica Park.  That event is scheduled to include youth hockey, OHL games, the Great Lakes Invitational college tournament, an AHL game between the Grand Rapids Griffins and Toronto Marlies, and a matchup of alumni from the Red Wings and Maple Leafs.