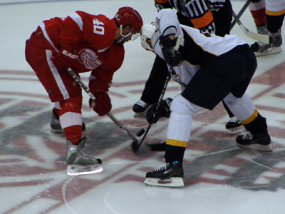 On Saturdays in Nashville and Back-to-Backs

I feel like 120% of Wings games in Nashville are on Saturdays, on the second leg of a back-to-back. (@georgemalik)

I thought to myself, “He’s right, it does feel like every time the Wings are in Nashville, it’s on a Saturday wrapping up two games in two nights.” And after looking into some stats, he’s not entirely wrong.

The Red Wings have had 81 regular season games scheduled against the Predators (including ones yet to be played this season). Of those, 21 were played on a Saturday. Of the 21 Saturday games against the Preds, 16 of those were in Nashville. Of those 16, 12 were on the second night of a back-to-back.

When I first pulled those numbers up, I felt like they were absurdly high, so I dug around a little more.

First, a disclaimer: I’m in no way a statistician so I don’t know if these numbers really mean anything, I just know how they look. Additionally, any games that were rescheduled were counted for the days they were actually played, so the numbers may not represent how things were originally scheduled. Neutral site games where the Wings are the designated road team count as a home game for their opponent. I also don’t have any numbers for the Red Wings’ opponents, so just because the Wings are playing their second game in a row doesn’t mean the opposition isn’t as well.

The previously-mentioned 14.8% of total games against Nashville that are played on Saturday on the road after playing the night before is the highest percentage against any team on a Saturday. Next closest are the New York Islanders at 10.3%.

The overall leader in this stat is the Chicago Blackhawks. Of the 721 games between the Wings and the ‘Hawks, 15.7% have been played in Chicago on Sunday when the Red Wings played on Saturday.

On Monday, the Tampa Bay Lightning lead, with 3.1% of all Detroit – Tampa Bay matchups coming on Monday in Tampa after the Wings played on Sunday. That said, it’s only happened once, Tampa really only leads because the two teams have met only 32 times total. The Wings have met the Rangers under those conditions four times but have played them 575 times overall, so that number gets diluted.

A similar case happens on Tuesdays. The Wings have played the Buffalo Sabres and Vancouver Canucks – 1970 expansion siblings – twice under these circumstances but have played those teams more often than the Atlanta/Winnipeg franchise, which leads the way at 7.1% (one of 14 games).

Wednesday and Friday are interesting, as the Florida Panthers lead both days with the same percentage, 8.7%.

Thursday is led by the San Jose Sharks, with 5.1% (though the Predators make another appearance, coming in second at 4.9%).

As I said, I’m not a statistician. I can’t talk about outliers or standard deviation or anything like that. That said, I think we can look at some of these numbers and give them some historical context.

The Red Wings – Blackhawks rivaly goes back over 85 years, to a time when travel and scheduling weren’t what they are now. Weekend home-and-home matchups were a bit more common then. I’m willing to bet a significant portion of the Sunday games in Chicago were preceded by a Saturday game between the teams in Detroit.

Monday, Tuesday, Wednesday and Friday, as I mentioned, are anomolies due to the fact that the Red Wings have played the Lightning, Thrashers/Jets and Panthers so infrequently.

With San Jose on Thursday, I think you have to take into account the fact that the Wings and Sharks often meet with Detroit on a West Coast road trip. These trips usually include three games in four nights, meaning that one of the California teams will always get the Red Wings a night after they played elsewhere.

Nashville (both Saturday and Thursday), is interesting to me, though.

There’s no long road trip for the game to be a part of. There’s no historical reason. The teams are divisional rivals who’ve played often enough that the numbers aren’t insiginificant.

On that last point, it’s worth noting that the Wings have played in Nashville with no rest (all days combined for 20) more times than they’ve played the Atlanta/Winnipeg franchise under any circumstances.

If we’re to assume that the Nashville numbers are because the city is close enough that the Red Wings don’t need to be on a road trip to make a run to Nashville, consider Columbus. The Wings and Blue Jackets have met 69 total times and 14 of those came in Columbus with Detroit playing the night before. That’s 20.3% of all games but no single day of the week has more than 5.8% (Sunday).

Against the Predators, meanwhile, the Wings are on the road and unrested 24.7% of the time, with those games clearly loaded onto one day of the week – Saturday.

The Predators have only been in the league for two years longer than the Blue Jackets. They’ve shared a division with the Red Wings the whole time. They’re geographically similar. You’d think their scheduling would be similar as well.

Again, I’m not sure that these numbers mean anything but I was surprised to see how things fell out. I’d be very interested in seeing these numbers for other teams. Even better would be the opposite numbers: Is there any team that comes to Detroit tired on a certain day more often than not?