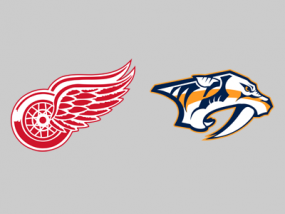 Henrik Zetterberg, completely blind pass to Pavel Datsyuk, who fakes the hell out of (future teammate) Ryan Suter and then snaps a shot past Pekka Rinne. With five seconds left in regulation of a previously-tied game.

This, after the Predators had gained a lot of momentum by grinding the game to a standstill and nullifying an early Detroit lead.

The game winner was all skill but it was a gritty win. Nashville controlled the style of play for much of the game, but the Wings manufactured that last chance and it was a beauty.

That’s twenty-two wins in a row at home, extending their own single-season record and tying the record set across two seasons by the Boston Bruins. Hell of a run.