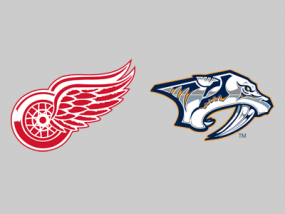 Compare Wednesday’s game against Vancouver and tonight’s matchup vs. Nashville and it’d be tough to believe they featured the same Red Wings team.

Jimmy Howard looked sharp, the forecheck was strong and the defense was sound positionally for most of the night against the Predators.

Negatives? Three of the four goals (not counting the ENG) were on amazing individual efforts rather than great team play and the fourth included a lucky bounce. Of course, as Mickey Redmond is fond of saying, “They don’t ask ‘How?’ just ‘How many?'”

The Nashville goals came on mental lapses and on most nights the Wings can’t afford that. Tonight they could but it’s something to be concerned about.

The two points are huge no matter what led to them. Detroit now sits three points back of Nashville with two games to play between the teams. No matter what else happens tonight, the Red Wings won’t drop out of eighth spot in the Western Conference. That’s a successful night.