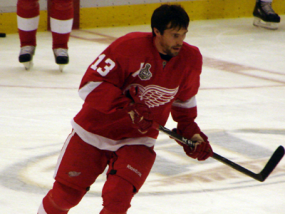 75
0
by Clark Rasmussen
In Game Recap

Pavel Datsyuk scored Detroit’s first goal and made a slick stick play to set up another as the Red Wings earned a 4-1 win over the Pittsburgh Penguins.

Fellow Russian Evgeni Malkin scored Pittsburgh’s lone goal as the countrymen appeared locked in a duel early in the game.

Malkin got the Penguins on the board with just five seconds remaining in the first period. Racing down the right wing on a two-on-one with Chris Kunitz, Malkin snapped a quick shot to the wide side of Detroit goalie Jimmy Howard, off the post and into the net.

Datsyuk pulled the Red Wings back even with 3:59 left in the second period. After Todd Bertuzzi took the puck away from Matt Niskanen in the left corner he got it to Datsyuk at the top of the left circle. Datsyuk slid across into the high slot and flung a backhander back across Penguins’ netminder Marc-Andre Fleury, beating him stick-side.

Johan Franzen’s power play goal at 5:15 of the third period put Detroit out in front. Datsyuk knifed an attempt to clear the Pittsburgh zone by Matt Cooke out of the air and worked the puck down to Franzen in the left faceoff circle. Franzen wristed a high shot past Fleury to make it 2-1.

Danny Cleary added an insurance goal with 4:24 remaining. On a rush with former Penguin Chris Conner, Cleary drove to the net and tipped a pass through Fleury, giving Detroit a 3-1 lead.

Franzen’s goal was the only power play tally of the night. The Red Wings had two tries with the extra attacker while the Penguins had four.

Howard finished the game with 25 saves on 26 shots while Fleury stopped 21 of 24 chances.

The Red Wings are back in action on Thursday when they visit the Nashville Predators.

Healthy scratches for Detroit were Cory Emmerton and Mike Commodore… The Penguins were without Sidney Crosby, Kris Letang and Zbynek Michalek.


Tatar Says He’s Been Called Up