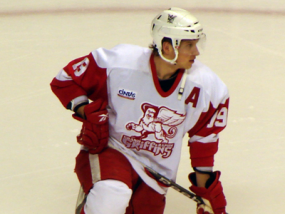 The Detroit Red Wings score two goals on plays off the end boards and one more with a bouncing puck Saturday night, leading to a 3-1 victory over the Pittsburgh Penguins and a 1-0 lead in their Stanley Cup Finals matchup.

Stuart opened the scoring with 6:22 left in the first period. After holding in the puck at the Pittsburgh blue line, Stuart snapped a shot purposely wide of the net in an attempt to work it down low to Marian Hossa.

Instead, the puck bounced off of the end boards and came back to the side of the net, hitting the back of Pittsburgh goalie Marc-Andre Fleury’s leg and deflecting into the goal.

Fedotenko tied the game with 1:23 left in the period. Stuart gave the puck up to Evgeni Malkin on the left wing in the Detroit end and Malkin fired a hard shot on Red Wings’ netminder Chris Osgood. Osgood couldn’t control the rebound and Fedotenko swept in to put it into the back of the net.

Franzen put Detroit back in front with 58 seconds left in the second period. Brian Rafalski fired a shot from the top of the right faceoff circle wide of the net, bouncing it off the back boards. Franzen picked up the puck at a low angle to the goal mouth and banked a shot of of Fleury and in.

Just 2:46 into the third period Abdelkader extended the Detroit lead. In a goal mouth scramble, Abdelkader gloved the puck out of the air and dropped it down to his stick. As it bounced, he golfed a shot into the top corner over Fleury’s shoulder.

Fleury finished the night with 27 saves on 30 Detroit shots. Osgood stopped 31 of 32 Pittsburgh chances, including a Malkin breakaway early in the second period.

Neither team scored a power play goal. Detroit had one chance with the extra attacker while Pittsburgh had two.

The two teams will meet in Game Two on Sunday night.

The Red Wings played without Pavel Datsyuk and Kris Draper, both of whom missed the end of the Western Conference Finals with injuries. Nicklas Lidstrom and Jonathan Ericsson returned to the Detroit lineup to start the Stanley Cup Finals.