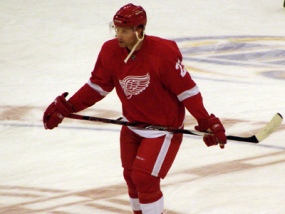 51
0
by Clark Rasmussen
In Game Recap

Detroit defenseman Brad Stuart sprawled out in the crease behind goalie Jimmy Howard and swatted a puck off the goal line late in the first period but the superb defensive effort wasn’t enough to keep the St. Louis Blues from a 3-2 win over the Red Wings.

Stuart saved a sure goal, being careful not to close his hand on the puck as he knocked it away to keep the game scoreless.

Johan Franzen opened the game’s scoring at 7:42 of the second period. Franzen carried the puck from the bottom of the right faceoff circle to the crease, driving at goalie Brian Elliot and lifting a shot from in close off his shoulder and into the net for a power play goal.

Alexander Steen would even things up on a St. Louis power play goal just 1:38 later. Jason Arnott won a draw in the right circle back to Steen, who blasted a shot from the high slot past Howard.

David Backes scored another power play goal just 45 seconds into the third period. Backes was left at the top of the crease by Jonathan Ericsson, who failed to cut off a pass from T.J. Oshie. All alone, Backes knocked the puck into the open side of the net.

Patrick Berglund rifled a shot past Howard at 2:38 of the period to make it 3-1 in favor of the Blues. Berglund was coming into the Detroit zone two-on-two but both defenders covered David Perron, leaving Berglund open to take a shot.

Jiri Hudler tipped a Danny Cleary shot past Elliot with 1:20 left in regulation – also a power play goal – but the Red Wings were unable to even things up.

After going 1-2-0 on their three-game road trip, the Red Wings return home to face the Phoenix Coyotes on Sunday.

Detroit was without forward Valtteri Filppula, who suffered a deep cut in his leg Sunday in Colorado. Cory Emmerton returned to the lineup in his place… Mike Commodore was the healthy scratch on defense.