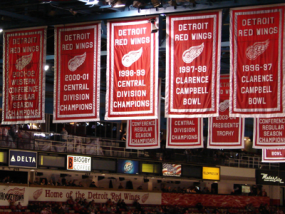 I was in the middle of some updates to DH.N tonight when Twitter absolutely exploded over the news of NHL realignment having been approved by the league’s Board of Governors.

I’m supposed to be up early for a product launch at work tomorrow and there’s a lot to cover on this topic, so I’m going to cram it all into one post and hope I don’t miss anything. I’ll break it out in to facts as we know them now, my opinion on those facts, and some speculation / opinion going forward.

Let me ask that if you like what I have to say here, please use one of the new (or rather, finally-added) sharing buttons at the bottom of this post. If you don’t like it, feel free to reply and let me know what you think I’ve got wrong. Realignment is a topic I think is fun, I touched on it earlier this season and I like hearing different opinions.

Facts
The NHL’s Board of Governors approved the realignment of the league from two conferences, each containing three divisions, to four conferences. The word “conference” is being used by the league rather than “division” at this point.

Four teams from each conference will make the playoffs, with the first two rounds of the playoffs determining conference champions. This is similar to the divisional playoff the NHL used from 1982 to 1993.

Seeding for the third round of the playoffs (the current Conference Finals) has not been determined. The predominant theory is that the Conference Champions would be seeded 1-4 based on their regular season records, with the third round being a Stanley Cup Semifinal and the fourth being the usual Stanley Cup Final.

The actual alignment (pending the possible relocation of the Phoenix Coyotes, which we won’t know anything about for several months it would seem), will be as follows:

Opinion
As I mentioned on last week’s TP:60, I want to see more of the Original Six. This alignment and schedule means that every Original Six team plays in Detroit every season and the Wings play in each Original Six arena every year. I’m greedy, I’d like to play Toronto and Montreal and Boston and the Rangers even more, but this is a good compromise.

The added East Coast games come at the expense of two trips west, which I would also say is a good thing. For fans, that means a handful of games in the Pacific Time Zone are replaced by games in the Eastern Time Zone. Exactly how the schedule comes together will determine the miles the Red Wings themselves will travel but the team is happy with it so I’ll go with them.

It’s important to note that while some media outlets are referring to inter-divisional play as a home-and-home, that’s not entirely true. I might be nit-picking but I see a home-and-home as one game in one arena, then both teams packing up and going straight to the other team’s arena for a game. That may happen with this schedule but it’s not required to happen.

Also on the language front, I think “conference” is more appropriate than “division” if we’re going to see the conference champions reseeded in the third round. At least with how sports leagues are currently named. There was a time when the winners of the NHL’s East Division took on the winners of the West Division for the Stanley Cup.

I’m also pretty happy with Detroit’s new conference. This is very, very similar to the original Central Division, a carry-over from the old Norris Division. That alignment had Chicago, Dallas, Detroit, St. Louis, and Winnipeg, along with the Toronto Maple Leafs. We didn’t get Toronto back but we added Minnesota (who were in the Norris as the North Stars before moving to Dallas) and Nashville (who doesn’t have the same history as the other locations but is a geographic fit). Maybe its 1990s nostalgia but I think the old Central was pretty good and we’re very close to what it was now.

A big knock against these conferences has been the fact that they’re unbalanced. Two have eight teams, two have seven, which some say is unfair. In my opinion, the only entirely fair league is one with a completely balanced schedule and a single-table playoff. There is no chance the NHL will go to that so this is the next best thing. Detroit travelling to the Pacific Time Zone four times a year when they were further east than the now-defunct Atlanta Thrashers was certainly less fair than this.

Another option would be to name them after whatever trophies are awarded to their champions, which leads me to my final topic…

What will the champions of these conferences be awarded? Anything at all? Division champions weren’t awarded anything but conference champions have received a trophy since 1981. My suggestion would be to keep the rich tradition of the existing trophies while correcting a pair of wrongs.

The playoff champion of Conference A would receive the Clarence Campbell Bowl, currently awarded to the Western Conference Champion. As one of the two more western conferences, Conference A seems to have a right to carry that tradition on.

Similarly, Conference D’s champion would receive the Prince of Wales Trophy. Conference D is the heart of the current Eastern Conference, whose playoff champion currently earns that trophy.

With the conference situated in the footprint of the old International Hockey League, the Conference B champion would be awarded the Turner Cup. Originally the IHL’s championship trophy, it currently sits at the Hockey Hall of Fame. If the United Hockey League could change its name to the IHL and successfully petition for the trophy’s use (until that league also went under), I have no doubt that the NHL could gain control of this piece of hockey history.

The NHL would have a chance to right what I think was a wrong in the trophy for the Conference C champion. The O’Brien Trophy, originally the championship trophy of the National Hockey Association and then the NHL itself, could be awarded for the first time since 1950. I’ve long thought that the O’Brien Trophy should have been unretired and awarded to the league’s regular season champion, rather than creating the Presidents’ Trophy. Here it would finally be brought back to use in the conference featuring the Montreal Canadiens, a team that actually played in the NHA.

No doubt there will be more news about this realignment in the coming months and I reserve the right to change my opinion as new facts about these changes break.