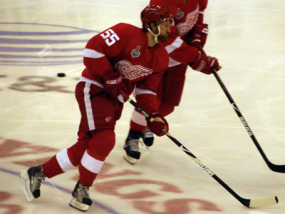 41
0
by Clark Rasmussen
In General

Chris Osgood is gonna take a lot of blame for this loss – and he should, to a certain extent – but the Phoenix empty-net goal pisses me off so I put the blame for killing Detroit’s chance at tying things up on Niklas Kronwall.

Your team started slow (again) and had to battle back to get within one. You’ve got the extra attacker and you lucked into a timeout when the Coyotes had to take one after an icing. You’ve got possession at your own blue line and what do you do? Flub a cross-ice pass, giving away the puck for an easy shot into the empty net.

That’s not lack of skill. It’s not a bad break. It’s a stupid mistake.

It’s also indicative of what’s been wrong with the Red Wings even while they’ve been winning. The talent is there, obviously; they just find ways to screw things up.


Abdelkader In, Hudler Out as Red Wings Host Predators