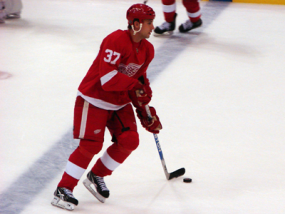 Janik was recalled from the Grand Rapids Griffins today and is expected that he will play in place of Brian Rafalski tonight. Rafalski left Monday’s practice early.

With Jonathan Ericsson also out, the Red Wings needed to call up Janik to have six defensemen. To make room on the roster, injured forward Kris Draper was put on the short-term injured reserve. Draper will be eligible to return on Saturday.