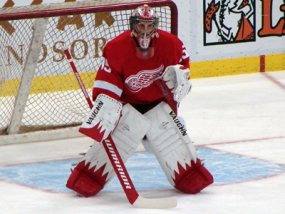 57
0
by Clark Rasmussen
In Game Recap

Jimmy Howard stopped 39 of 40 shots against on Monday night but it wasn’t enough for the Detroit Red Wings, who dropped a 1-0 decision to the Columbus Blue Jackets in overtime.

Blue Jackets netminder Steve Mason stopped all 34 shots he faced – including two in overtime – in earning the shutout victory.

It was the third time in their last four games that the Red Wings were shut out.

The only goal of the game came 3:12 into the overtime period when Fredrik Modin walked around Detroit blueliner Brad Stuart and snapped a shot on net from the top of the left faceoff circle. Modin then jumped into the slot to pick up the rebound and slid it in around the sprawling Howard.

The Red Wings were once again unable to capitalize on any of their four power plays, including 43 seconds of five-on-three.

The Red Wings next action will be their annual New Years Eve game as they play host to the Colorado Avalanche.

Detroit forward Ville Leino was a healthy scratch in favor of call-up Mattias Ritola… The Blue Jackets were without Chris Clark and Milan Jurcina, acquired earlier in the day from the Washington Capitals for Jason Chimera.


Eaves Out Against Avalanche