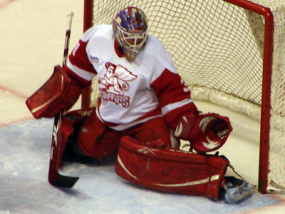 Kicking off today’s gameday thread a bit early ’cause I’ve got meetings all afternoon and then I’m heading straight to the game.

Steve Yzerman will drop the puck for tonight’s game as the Red Wings honor him on his Hall of Fame inductment. Any reason to celebrate Stevie is good enough for me so I’m psyched about that.

Not so cool is the fact that Chris Osgood and Kirk Maltby will miss the game with the flu. This puts Drew Miller in the lineup in Maltby’s spot while Daniel Larsson has been called up to back up Jimmy Howard in goal.

I thought Miller would get into this game anyway, likely replacing Brad May. The circumstances changed but the result is the same.

Roberto Luongo will make his first start since being injured against Detroit on October 27. He played in relief of Andrew Raycroft on Tuesday after Raycroft allowed four goals to the St. Louis Blues.