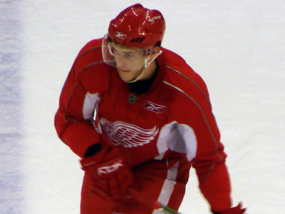 41
0
by Clark Rasmussen
In General News

Kris Draper will rejoin the Wings’ lineup for the first time since May 22, Game Three of the Western Conference Final series against the Chicago Blackhawks. He was a healthy scratch in Games Two and Three of the Stanley Cup Finals as coach Mike Babcock was hesitant to change a winning lineup.

Pavel Datsyuk could return to the ice for the first time since May 19, Game Two of the series with Chicago. Datsyuk completed a full practice with the team on Wednesday but then skated for an extended period in the Thursday morning skate, longer than usual for a gameday. He is considered a game-time decision.

A Detroit win tonight would put them up 3-1 in the series, giving them three tries to get one more win. Should the Penguins win, the Red Wings will have to head back to Detroit for Game Five having lost the 2-0 series lead they had when they came to Pittsburgh.

Reffing Bad But Not at Fault for Wings’ Loss


Not Gonna Do It