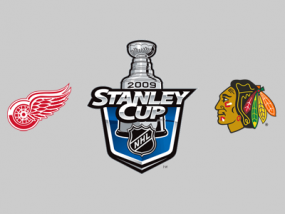 Lidstrom, Datsyuk Out for Game Five

The Detroit Red Wings will remain without captain Nicklas Lidstrom and forward Pavel Datsyuk for tonight’s Game Five against the Chicago Blackhawks. Red Wings head coach Mike Babcock ruled the two players out after they missed the morning skate.

“I think they’re both getting closer,” said Babcock. “I’d like to think they’ll play the next time we play. I thought that today though.”

Both players, along with Kris Draper, also missed Game Four of the series. The Wings are expected to use the same lineup as they did in that game, with Justin Abdelkader and Chris Chelios playing.

The Blackhawks had goaltender Nikolai Khabibulin back on the ice for the morning skate after he missed Game Four. Martin Havlat did not skate with the team. He was injured in the past two games on hits by Niklas Kronwall and Brad Stuart.


Red Wings to Host Game One Against Penguins on Saturday