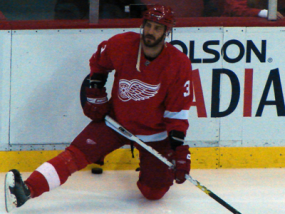 Holmstrom Returns as Lilja is Placed on LTIR

Tomas Holmstrom will return to the Red Wings lineup tonight as Detroit hosts the Phoenix Coyotes but another Wing replaces him on long-term injured reserve.

Detroit placed defenseman Andreas Lilja on LTIR retroactive to February 28, when he suffered a concussion in a fight with Nashville’s Shea Weber. Lilja will miss a minimum of 10 games and 24 days, making him uneligible to return before March 27.

With the move, the Red Wings will be able to keep Jonathan Ericsson in the lineup. Had Lilja not been placed on LTIR, Ericsson would have been sent back to the Grand Rapids Griffins with Holmstrom’s return.