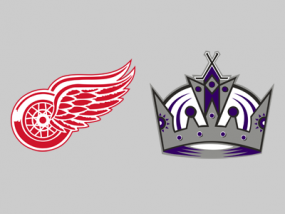 The Red Wings go into tonight’s matchup with the Los Angeles Kings with the same lineup they used to shut out the San Jose Sharks on Thursday.

This means that Ty Conklin gets the start. Chris Osgood once again skipped the morning skate as he attempts to recover from a groin injury.

If Osgood is so hurt that he can’t practice, it doesn’t seem like he’d even be able to come into a game in relief of Conklin. If Conklin gets hurt, will Osgood actually be able to play? If not, I think the Wings should get creative and dress Derek Meech as the backup. If nothing happens then it doesn’t matter, if Conklin gets hurt the Wings are screwed either way, and if Osgood sits for 10 games he can be retroactively put on the IR to get some cap space to call up Jimmy Howard or Daniel Larsson.

No, I don’t expect that to happen.


Osgood Won’t be Scratched Against Blues