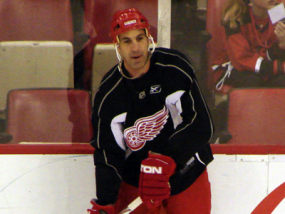 46
0
by Clark Rasmussen
In General

After Chris Osgood’s successful return to the ice on Saturday, Ty Conklin gets the start in net for Detroit as coach Mike Babcock attempts to start a goalie rotation. Osgood is slated to get the nod on Thursday against Dallas.

Chris Chelios and Brett Lebda will be the Wings’ third defensive pair, with Andreas Lilja and Derek Meech coming out of the lineup.

The Blue Jackets will get winger Jared Boll back into their lineup but will be missing Raffi Torres. Rookie Steve Mason is expected to start in net.