We have moved some color schemes around, and the team will be something Knights. K-n-i-g-h-t-s. We have the name. The name is trademarked, we have the domain name.

I don’t really think that the name will be (Something) Knights is a surprise.  But Foley confirming that they have the trademark and the domain name gives us something to work with.

The only names that are in the USPTO database as of right now are the previously-reported Desert Knights, Silver Knights, and Golden Knights.  That said, the database is about five days behind, so something could have happened this week.

If it’s one of those three, domain registrations would appear to narrow it down to Golden Knights.

All of the important domains for Silver Knights and Desert Knights are registered privately and are listed as for sale.  Murray Craven had previously said that the Foley organization owned the Silver Knights domains but I’ve since confirmed that they do not.  Foley said he owned the Desert Knights domains but, given that they redirect to an eBay auction, I think it’s safe to say that he doesn’t.

This leaves the Golden Knights domains.  They’re registered to a variety of people but none of them are explicitly for sale.  This could mean he has an agreement to buy one or more of them and simply hasn’t taken possession of them yet.

Additionally, Foley had this to say about the branding:

Take a look at Red Rocks.

If you ask me, there’s a lot of gold in there.

So of the names we’ve seen, right now I lean towards it being Las Vegas Golden Knights.  Which is disappointing because it’s probably the worst name of the bunch.

The big caveat, as I mentioned, is whether or not anything has been registered that hasn’t hit the databases yet.  We’ll about that see in the coming days.

Based on a recent domain registration, "Sand Knights" joins the list of possible names for the NHL's new Las Vegas team. 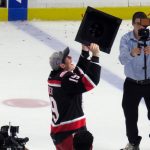 Tomas Nosek was selected by the Vegas Golden Knights in the expansion draft, the league announced on Wednesday.