202
0
by Clark Rasmussen
In General

Just hours after the owner of the NHL’s coming expansion team in Las Vegas, Bill Foley, confirmed to Amber Dixon of NBC Las Vegas that his organization was the one who had registered domains related to the name “Las Vegas Desert Knights” – a name that I first speculated on earlier this week – three trademarks filed by his organization were published to the United States Patent and Trademark Office Database. 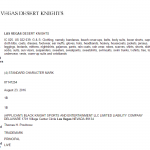 One of the trademark filings for Las Vegas Desert Knights 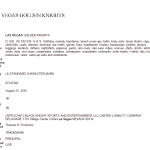 One of the trademark filings for Las Vegas Golden Knights 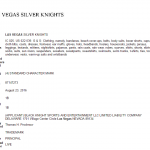 One of the trademark filings for Las Vegas Silver Knights

Variants where “Las Vegas” is replaced by “Vegas” were also registered.

It’s worth noting that Foley’s organization does not seem to own any domains related to the Golden Knights name.

The Las Vegas organization had previously stated that they owned domains and trademarks related to Las Vegas Silver Knights.  The Silver Knights domains were registered privately in April – possibly by Black Knight Sports and Entertainment – but we now know that they did not own the trademarks at that time.

On August 11, Foley said that – in addition to three Hawk-related names – two more names had yet to be filed.  Desert Knights is the only name with domain registered since that date.

Update (8:25 AM): It might be worth noting that, while lasvegasdesertknights.com and lasvegasnighthawks.com (for example) do not have DNS properly configured to deliver an actual site, lasvegassilverknights.com currently redirects to a “For Sale” page.

I think that Foley doesn’t actually own the Silver Knights domain (remember, he said he owned the trademark earlier this month when it clearly wasn’t filed until this week).  That would make Desert Knights the only name that he owns both the trademark and the domain for.

Let me be clear, that part is just my speculation based on lasvegassilverknights.com acting differently from the other Foley-owned domains.