Malik pointed out that RWC has their annual training camp report up and running and has posted Detroit’s roster for the pre-camp prospects tournament.

Being a sweater numberphile, I look forward to RWC’s training camp rosters because they show which players will get which numbers. Players typically keep the same number throughout camp and the ones expected to compete for roster spots carry their numbers into the regular season.

As of this writing, center Stephen Johnston is the only player assigned a number, the #52 worn last season by Jonathan Ericsson. This likely means that Ericsson will be switching numbers for the upcoming season.

Ericsson wore #52 when he skated onto the ice with the rest of the Black Aces after Game Six of last spring’s Stanley Cup Finals but the truck carrying him and Justin Abdelkader in the Red Wings’ championship parade bore Abdelkader’s #8 and #2. We’ll see if that switch (along with any others) is being made in the next few weeks.

Edit (10:10 PM): RWC says that the number listing was an error. We’ll see if the #2 on Ericsson’s parade truck was also an error. 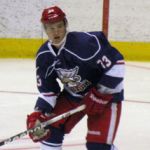 I just caught that RWC updated their camp roster again, this time with new player numbers.