The 2022 NHL Prospect Tournament begins today and I just realized that I ignored the release of the Red Wings’ roster for the event when it was released a couple weeks ago, so I’ll take a look at it now.

And, of course, by “take a look at it,” I mean I’ll over-analyze the assigned jersey numbers, as per usual.

Of the returning players, only Amadeus Lombardi has switched his number, as the #96 he wore over the summer now belongs to Jake Walman.  Lombardi takes the #78 that was worn by Shia Buium, who is not participating in the Prospect Tournament.

Five players on the roster were not on the ice in Detroit in July but had participated in various camps prior to that.  Elmer Soderblom keeps the #85 he wore in the 2019 Prospect Tournament while Kirill Tyutyayev retains the #79 he wore in camp last year, as do Seth Barton with his #49 and Jan Bednar with #60.  Albert Johansson wore #95 in Development Camp in 2019 but switches to #20 as #95 is now assigned to Tnias Mathurin.

Five free agent invitees who weren’t at Development Camp have taken the numbers of players who were there but aren’t on the Prospect Tournament roster.  Marcus Limpar-Lantz takes the #83 previously worn by William Wallinder.  Jacob Mathieu gets Dylan James’ #87.  Jake Uberti gets the #61 of Ethan Phillips.  Drew Worrad takes Theodor Niederbach’s #62.  Last-minute addition Jeremie Biakabutuka gets the #63 worn by Sam Stange.

Lastly, Ivan Ivan gets the #86 last worn by Adam Brubacher in last year’s training camp.  There’s a guy who should have gotten a palindromic number. 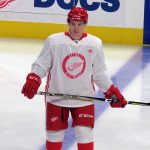