As per usual, financial terms of the deal were not announced, but the deal reportedly carries a $2.5 million salary cap hit.

Kubalik became an unrestricted free agent earlier in the week when the Chicago Blackhawks chose not to give him a qualifying offer, which would have made him a restricted free agent.  He is the second player in as many years to depart Chicago for Detroit under those terms, following Pius Suter.

Combined with the signing of Andrew Copp and the expected deal for David Perron, Detroit GM Steve Yzerman has added an entire line’s worth of forwards to the Red Wings’ lineup.  As such, is sure seems like someone from last year won’t be back in the Winged Wheel next season. 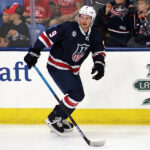 The Red Wings announced the signing of center Andrew Copp on Wednesday.

A couple days ago I took a look at possible Red Wings free agent targets. Things have changed a little bit since then so I figure I'll go over it again with just hours remaining before NHL free agency.