The Detroit Red Wings earned a 3-1 win over the Arizona Coyotes on Saturday night, moving them into a tie for first place atop the Eastern Conference.

Detroit’s 71 points equal that of the Lightning following Tampa Bay’s loss to the Los Angeles Kings, though the Red Wings have two games in hand. The Montreal Canadiens have a game in hand on Detroit and sit two points back.

Riley Sheahan got the Red Wings on the board at 8:11 of the second period. Pavel Datsyuk got the puck and sent a centering pass to Sheahan for a blast past Arizona goalie Mike Smith on a Detroit power play.

The Coyotes had a prime chance to even things up with 8:22 left in the third period, as Martin Erat was hauled down on a shorthanded breakaway. Detroit netminder Petr Mrazek stayed with him on the ensuing penalty shot, though, and preserved the one-goal lead.

With three minutes remaining, Tomas Tatar made it 2-0 on a two-one-one with Darren Helm. Helm carried the puck into the Coyotes’ zone down the left wing after capitalizing on a mistake by Oliver Ekman-Larsson in the Detroit end, then centered it to Tatar to snap a shot past Smith.

Ekman-Larson would make amends and cut the Detroit lead in half with 1:54 remaining, putting a loose puck past Mrazek with Smith on the bench for an extra skater to make it 2-1.

Helm would once again get the best of Ekman-Larsson to wrap up the game’s scoring, racing past him at the Detroit blue line to get to a loose puck. Ekman-Larsson hauled him down in front of the empty Arizona net, which would have been an automatic goal had Helm not scored anyway with 1:16 remaining.

Mrazek finished the night with 22 saves on 23 shots. Smith stopped 23 of 25 chances.

Detroit went one-for-six on the power play to the Coyotes’ zero-for-five.

The Red Wings are now off until Wednesday when they visit the Pittsburgh Penguins. 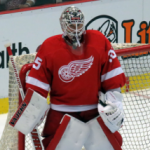 Red Wings Score Five in the First to Power Past Coyotes

One game after being pulled for allowing four goals on 18 shots, Detroit goalie Petr Mrazek rebounded, leading the Red Wings to a 3-0 win over the Tampa Bay Lightning in Game Three of their Atlantic Division Semifinal matchup.