MacDonald makes his return from a knee injury that kept him out for the last 17 days.

Also returning to the Islanders lineup is Doug Weight, who missed six weeks with a sprained MCL.

A win tonight will clinch the Central Division for Detroit, put them two points up on the San Jose Sharks in the race for first place in the Western Conference, and give the team its fourth-straight 50-win season. 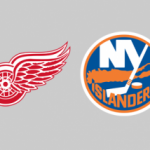