Peter Forsberg‘s status for Tuesday’s Game Three is still up in the air. He missed the first two games of the series with a groin injury.

“It’s very hard to sit on the side, especially when you lose. I worked hard at home for eight months, and I didn’t come here to sit in the dressing room or not play in the playoffs. Hopefully, I can play tomorrow,” Forsberg said after an hour-long practice on Monday.

Meanwhile, Jose Theodore will get the start in the Colorado crease dispite having been pulled in the second period of both of the first two games.

Defenseman Scott Hannan‘s status is unknown after missing the second game of the series with a foot injury.

The Red Wings are not expected to make any lineup changes.

In the Detroit area the game will be available on FSN Detroit. Versus will cover it nationally.

The Red Wings look to wrap up their Western Conference Semifinal matchup with the Ducks in Anaheim tonight. 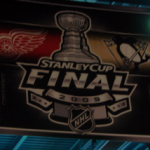 We're inside twelve hours to the opening faceoff of tonight's Game Seven and I think this is the last time I'll have a clear thought until this thing is over.

The Red Wings' season could end this afternoon, as they face a 3-1 series deficit heading into Game Five in Boston.