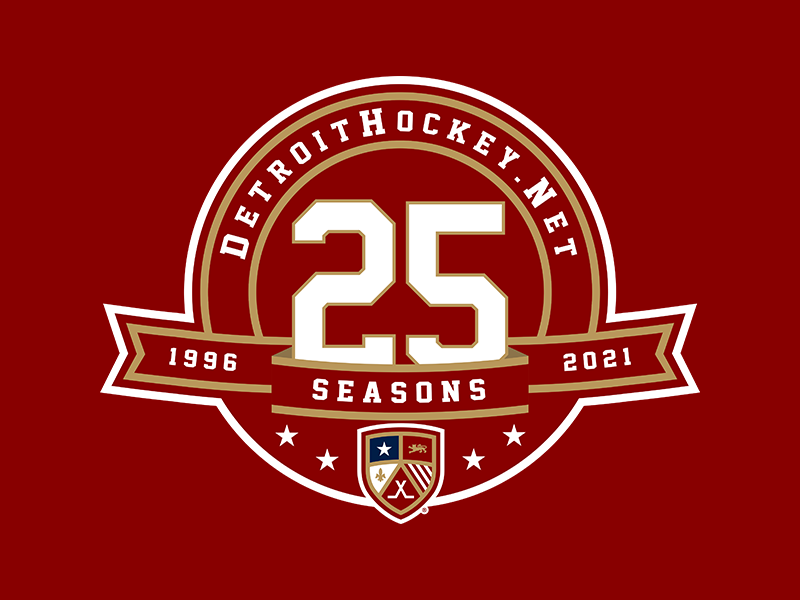 137
0
by Clark Rasmussen
In General

Today marks the twenty-fifth anniversary of the day I started the site that would become DetroitHockey.Net.  As has become the norm on the site’s anniversary, I feel like I should say something profound and find myself coming up short.

When I think about those bad old days of the Internet and compare them to now, I feel very “old man shakes fist at cloud.” Back in my day, we didn’t have Twitter/Facebook/podcasts/YouTube/WordPress.

In the bad old days, “fan sites” would never be given media credentials.  This later extended to blogs, especially through the late-aughts.  Now, with the collapse of the journalism industry, PHWA members have had to resort to blogging and, for some reason, suddenly that “no blogs” rule doesn’t apply to them.

I’ve made a tradition of talking about the jersey numbers matching each of DH.N’s anniversaries.  Number 25 is an easy one.

Darren McCarty was wearing #25 when this site first started and held onto it until his post-lockout buyout in 2005.  He then reclaimed it when he returned to the team in 2008 and wore it through the 2009 season.

Brian Lashoff was assigned the number in camp in 2010, having previously worn #65 and #49 in various camps.  He would eventually switch to #23 before giving it up to Dominic Turgeon and switching to #32.

When Lashoff switched to #23 in 2012, it gave Cory Emmerton the opportunity to take #25, having debuted with the Wings wearing #48.

Upon Emmerton’s departure for the KHL in 2014, #25 was assigned to Dylan Larkin at the Wings’ summer development camp.  He would never wear it in a game for Detroit, though, as Mike Green was signed that summer and claimed the number.  Larkin was set to switch to #17 in honor of Doug Brown but it ended up being taken by free agent signee Brad Richards, leading to Larkin ending up with #71 and Vili Saarijarvi switching from #71 to #28 (and later to #29, though he only wore these numbers in camps).

Since Green’s departure, #25 has gone unassigned, but the pending announcement of Detroit’s training camp roster could change that.