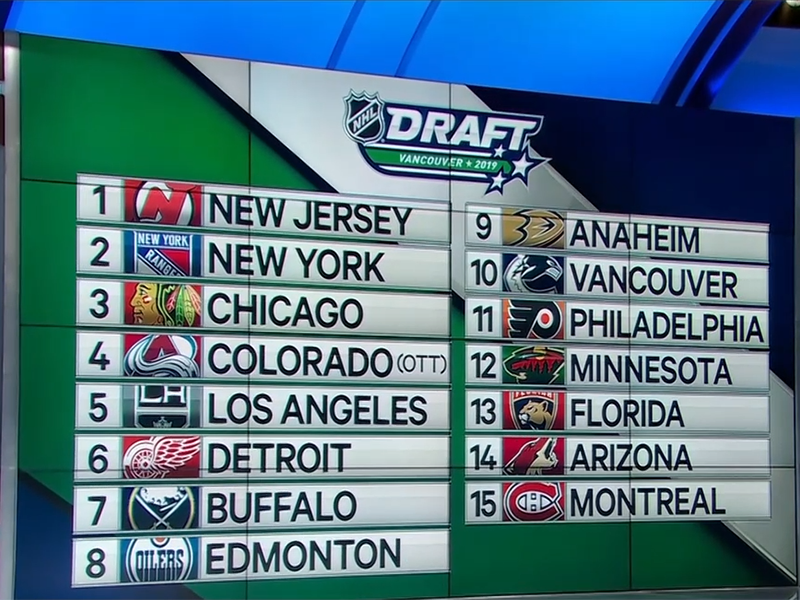 On A June Draft and Draft Lottery Changes

187
0
by Clark Rasmussen
In General

The National Hockey League is apparently making a push for holding its Entry Draft sometime in June, while still intending to finish the 2019-2020 season sometime later in the year.

Obviously there would be a lot of logistical issues to sort out with such a plan, and one of the proposals would come as a pretty big benefit to the Red Wings (and Ottawa Senators).

As a Wings fan, obviously, the idea of picking no lower than second is fantastic, especially after having dropped three spots in each of the last two drafts due to the lottery.

That said, this plan makes me feel uneasy for several reasons.

Most importantly, I really dislike the optics of changing the rules mid-season.  Teams went into the season expecting the draft lottery to look one way and now they’re being told it might not actually play out like that.  Changing things on the fly is a breeding ground for conspiracy theories, which I’ll circle back to momentarily.

Of course, we’re in unprecedented times where every option needs to be on the table, so maybe a change like this is palatable.  But a midseason draft wouldn’t just be about a change to the draft lottery, it would also essentially mean a draft without trades, as no playoff-eligible team is going to want to move assets for draft picks.  This is another case where teams may have planned for a scenario that will be taken from them, as there are certainly general managers who would look to package a plethora of picks for a different form of help.

If the league were to resume in late summer and feature a Stanley Cup Finals series ending in October, for example, we would be looking at a draft occurring in the middle of what would be players’ draft +1 season.  Additionally, just because the NHL might be willing to extend their 2019-2020 season into the fall doesn’t mean the other leagues will, so you could see the Entry Draft taking place after the start of every other league’s 2020-2021 season, which would raise all kinds of questions about how that would even work.

I’m not saying there are any easy answers to this.  I think the reasons for a fall draft are better than those for a June one but I don’t have to worry about the business side of things so it’s easy for me to say that.

Coming back to the draft lottery, though…

The NHL adopted the current lottery system in the wake of the Connor McDavid draft, which saw the Sabres and Coyotes abandon all pretense of putting forth a competitive roster in an effort to get the best odds of drafting McDavid.  The Oilers ended up winning that draft, because of course they did, with Buffalo forced to settle for Jack Eichel at second overall.

To prevent such tanking, the NHL changed the lottery to give every non-playoff team a chance at first-overall, second-overall, and third-overall.  The worst team in the league now has higher odds of picking forth than they do of picking first.

I believe that to be an overreaction.  The league already had rules in place that could have been used to prevent tanking, namely, the ability to reject trades.  My thinking is that, if the league thinks a team is so blatantly tanking, it can stop accepting the team’s trades.  Otherwise, the current rules punish legitimately bad teams for what two kind of bad teams did in an ultimately-futile effort to get a generational talent.

That said, I don’t think restoring the old lottery rules should be done on the fly, as would be the case under the current proposal.

Here’s what happens when you spring unexpected changes on people: They think there’s an ulterior motive.  I say that with full acknowledgement that I still look at the 2009 Stanley Cup Finals and can’t help but think that the league knew that deviating from it’s originally-announced schedule would help the Penguins.  Let me spin you a conspiracy theory…

Going into Game Five of the 2009 Western Conference Finals on May 27, the Red Wings were beat up.  The Stanley Cup Finals had been announced as beginning on June 6, though, so they knew that if they could finish off the Blackhawks in that fifth game, they would have time to rest and heal.  They did win that game, needing overtime to do so.

And then the league announced that the Finals were being rescheduled.  Instead of over a week of rest, the Red Wings were getting two days.

With both the Wings and the Pittsburgh Penguins having finished their series early, it made sense to move the schedule for the Finals up a bit.  The league’s broadcast partner, NBC, was debuting Conan O’Brien as the new host of the Tonight Show the following week, though, so they weren’t comfortable showing games that might push into that timeslot.  Hence, the series had to start on the weekend, and why a break of eight days couldn’t become five but had to become two.  Detroit was expected to accept the change for the greater good of the league and its partner.

Without the rest, Pavel Datsyuk was too hurt to play, but the Red Wings still won the first two games of the series.  The second of which ended with Penguins star Evgeni Malkin given an instigator penalty for fighting Henrik Zetterberg.  According to new rules adopted that season, the late-game instigator meant that Malkin would be suspended for Game Three.

But the league announced that the rule was never intended for cases like that or players like Malkin and reversed the suspension.  Malkin tallied three assists and was the second star of the game as the Penguins won Game Three, continuing on to rally twice to win the series.

Both the rescheduling of the series and the reversal of Malkin’s suspension make sense in the context of extenuating circumstances.  However, the fact that changing the schedule or reversing the suspension weren’t even known to be options leading up to them actually happening provides room for a different narrative to be supplied.

As such, if the league fails to communicate exactly why the draft lottery is changed this year, if it is at all, and what other options were considered, they will be putting themselves in the position of breeding conspiracy theories.

Of course, in 2009 the Red Wings and their fans were told by many to suck it up because those changes, however they were communicated, were for the good of the league.  I’m sure anyone opposed to the proposed draft lottery changes will happily accept that explanation now.