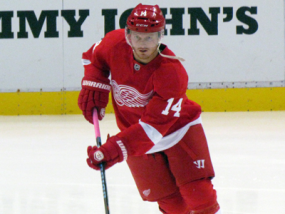 With under fifteen hours until the NHL’s trade deadline, Bob McKenzie, Pierre LeBrun, and Darren Dreger report via Twitter that the Red Wings have traded forward Gustav Nyquist to the San Jose Sharks.

DET has asked Gustav Nyquist to waive his NTC to facilitate a trade to SJ. Nyquist is apparently willing to do so, which would pave the way for DET and SJ to finalize/formalize this transaction.

The condition on the 2020 third-round pick is that it becomes a second-rounder if the Sharks make the Stanley Cup Finals this season or if Nyquist re-signs with San Jose this summer.  Additionally, the Red Wings are retaining 30% of Nyquist’s salary this season.

The salary retention is nothing so I’m not worried about that.  The Wings have the cap space for the rest of the season, they might as well use it.

Overall, though?  Based on other forward deals, it’s hard to argue that Nyquist should have gone for more.  That said, I’m kind of tired of Detroit’s strategy being to collect 100 second and third rounders and hoping to hit on some of them.

I absolutely get playing the percentages.  I get that you can’t trade for things that other teams don’t want to give you.  It’s just that this team isn’t very good right now, it isn’t very fun to watch, and even their rebuild strategy is boring.

So, yeah, good deal, I’m just not going to get excited about it.