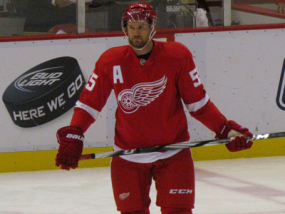 The Chicago Blackhawks announced over the summer that forward Marian Hossa would not play this season due to a skin condition.  Specific details have not been released, but the general understanding is that he essentially developed an allergy to his equipment, an ailment that was somewhat common in decades past.

The result is that Hossa develops an uncomfortable – possibly even painful – rash from wearing his hockey gear.  With medications increasingly unhelpful, the only way to avoid it is to stop wearing the equipment, which means not playing.

The NHL has investigated the situation and, per a report by The Athletic, has ruled that the Blackhawks can place Hossa on long-term injured reserve, giving them salary cap relief while Hossa is out.

Given that Hossa’s contract was one of the original back-diving deals and that this year just happens to be one of the ones that it looks like he was never supposed to play anyway, the timing is convenient.  That said, I don’t care about that.  I’m curious about how this applies to other LTIR cases.

As such, it’s clear that LTIRetirement doesn’t mean that you can’t play hockey anymore, just that it’s not worth it to do so.  Exactly how far does that stretch?

About his oft-injured left knee, Niklas Kronwall said in 2016, “I don’t know if I’ll ever be pain-free, but hopefully, I’ll be able to be out there in a position where it doesn’t bite as much.”  Surgery is an option but it would effectively end his career.

Kronwall continues to play because he can and, seemingly, because he wants to.  Is it worth it for him to do so, to play through the pain, as Hossa would have to?  If the answer is no, why wouldn’t the NHL’s ruling on Hossa (and Franzen) apply to him, giving the Red Wings an out from their cap situation?

Or what if the team decides he’s no longer healthy enough to help them, even if Kronwall wants to keep playing?  That seems to be the situation Joffrey Lupul and the Toronto Maple Leafs are in.  The Hossa ruling seems to allow for that as well, though the league is investigating Lupul’s case as well.

If this is an option, I’d be using it today.  Obviously the Red Wings aren’t, but the way I read it, we could see it come up in the future.