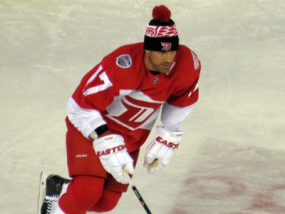 63
0
by Clark Rasmussen
In Game Recap

The Detroit Red Wings rallied from down 2-1 entering the third period on Saturday for a 5-3 win over the Colorado Avalanche in their Stadium Series matchup at Denver’s Coors Field.

With 6:32 left in the period, Darren Helm fed Justin Abdelkader from behind the goal for a quick shot from the side of the crease past Varlamov for a 3-2 lead, Detroit’s second of the night.

The game seemed to be headed to overtime until Brad Richards banged the rebound of a Niklas Kronwall shot from the point off Varlamov’s pad, through the air, and into the net for a 4-3 win.

Helm added an empty-net goal to wrap up the game’s scoring.

Tomas Tatar had opened things up 5:07 into the first period. After a brief scramble around the side of the net, Tatar collected the puck and snapped a shot from the bottom of the left circle through a screen by Nyqyust,

Nathan MacKinnon tied things up at 7:44 of the period, rifling a shot from the left wing past Mrazek on a rush.

With 5:22 remaining in the first, Tyson Barrie lifted a shot over Mrazek to make it 2-1. The Red Wings challenged the goal, saying Carl Soderberg interfered with Mrazek, but the call stood.

The Red Wings went scoreless on five power play tries while the Avalanche didn’t score on either of their chances with the man-advantage.

Mrazek finished the night with 24 saves on 27 shots. Varlamov stopped 23 of 27 chances.

Detroit’s healthy scratches were Brendan Smith and Teemu Pulkkinen… The game was briefly interrupted in the third period as wind lifted fake snow into the air, dumping some of it onto the playing surface.