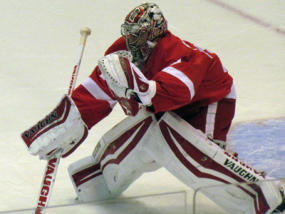 83
0
by Clark Rasmussen
In Game Recap

Detroit netminder Petr Mrazek stopped 35 of the 37 shots he faced and helped lead the Red Wings to a 3-2 win over the Los Angeles Kings on Friday night.

Dylan Larkin scored the eventual game-winning goal at 6:08 of the second period, banging home the rebound of a Justin Abdelkader chance to give the Red Wings a 3-1 lead.

Jeff Carter’s second goal of the night made it 3-2 with 9:17 left in the middle frame. Breaking into the Detroit zone, he snapped a shot from the top of the left circle past Mrazek.

The Red Wings would hold the Kings to just eight third-period shots and Mrazek would stop them all to preserve the lead and get the win.

Detroit opened the game’s scoring with 5:50 left in the first period on the power play. Henrik Zetterberg worked the puck down to Justin Abdelkader at the front of the Los Angeles net, who then moved it on to Tomas Tatar for a shot past goalie Jhonas Enroth.

Just 2:11 later, Carter scored on a shorthanded breakaway to tie things back up.

At 3:45 of the second, Mike Green jumped in from the point to bang a rebound chance in, making it 2-1.

Enroth finished the night with 26 saves on 29 shots.

The Red Wings are back in action Saturday night when they visit the St. Louis Blues.

Detroit got forward Brad Richards back from injury for the game. Andreas Athanasiou was returned to the Grand Rapids Griffins to make room on the roster for Richards.