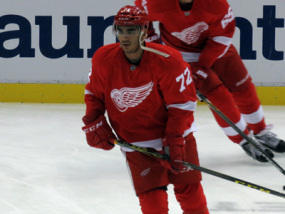 Andreas Athanasiou’s first career goal was the only one of the game on Tuesday night, carrying the Detroit Red Wings to a 1-0 win over the Washington Capitals.

Detroit goalie Petr Mrazek stopped all 38 shots he faced for his first shutout of the season.

Athanasiou’s tally came 4:06 into the third period when the rookie, playing in just his second career game, carried the puck end-to-end down the left wing and snapped a no-angle shot through Washington goalie Braden Holtby and into the net.

The Red Wings would hold off a frantic finish by the Capitals, who took 17 third-period shots.

Sniper Alexander Ovechkin took 15 shots on the night. His next goal will move him past former Red Wing and Capital Sergei Fedorov for most goals by a Russian-born player. Fedorov himself was in attendance, having been honored before the game for his induction into the Hockey Hall of Fame.

It looked as though the Red Wings may have taken a 1-0 lead early in the first period. The “war room” in Toronto instigated video review of a play where Holtby seemingly gloved the puck out of the net unnoticed by anyone on the ice. Replay showed Holtby’s glove clearly in the net but with the position of the puck unable to be determined, the call on the ice stood.

Holtby finished the night with 26 saves on 27 shots.

Neither team scored on the power play, with Detroit getting one chance with the extra attacker to Washington’s three.

The Red Wings return to action on Friday when they host the San Jose Sharks. Injured forward Pavel Datsyuk could return for that game.


Defenseman Quincey to Have Surgery