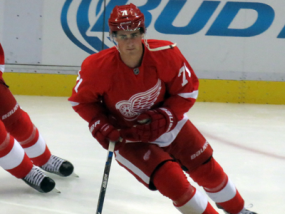 92
0
by Clark Rasmussen
In Game Recap

With 2-1 win over the Tampa Bay Lightning on Tuesday night, the Detroit Red Wings have consecutive victories for the first time since winning three games in a row to start the season.

Detroit rookie Dylan Larkin’s early third period marker stood up as the game-winner, the second of his career. Breaking down the right wing, Larkin dropped the puck to Justin Abdelkader as he gained the Tampa Bay zone and immediately got it back, then drove towards the net and fired a shot that deflected off the stick of defenseman Braydon Coburn and under goalie Ben Bishop’s elbow.

After a scoreless first period, Riley Sheahan had opened the game’s scoring for the Red Wings at 2:02 of the second. Gaining the Lightning zone with speed, Sheahan split the defense and snapped a shot from the high slot past Bishop for the 1-0 lead.

Tampa Bay would tie things up while skating on a five-on-three with 4:02 left in the middle period. Steven Stamkos’ initial shot rang off the post and Detroit netminder Jimmy Howard slid into position to block Tyler Johnson’s rebound chance, but the puck went right to Nikita Kucherov to bang into the open side of the net to make it 1-1.

The Lightning finished the night one-for-four on the power play while the Red Wings went scoreless on three tries with the extra man.

The Red Wings will look to make it three in a row on Friday when they visit the Toronto Maple Leafs.