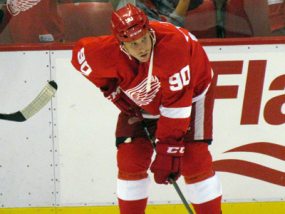 Weiss made just his second appearance of the season for Detroit after having spent much of last year injured. Over the weekend he scored two goals in two games for the AHL’s Grand Rapids Griffins in a conditioning stint.

With 6:24 left in the second period, Weiss scored his first of the game. After a shot from the point by Kyle Quincey, Weiss drove to the net to bang the rebound past Ottawa goalie Craig Anderson.

Weiss added the eventual game-winner with 2:08 left in the period. The rebound of a Darren Helm shot was loose in front of Anderson and Weiss knocked it past the netminder to make it 4-1.

Just 2:43 into the third period, Erik Karlsson made it a two-goal game, beating Detroit goalie Jimmy Howard from the high slot.

The Red Wings would hold off a Senators surge for most of the period until 34.3 seconds remained, when Chris Neil tipped a Mike Hoffman shot past Howard to pull Ottawa to within a goal.

Howard would shut the door in the closing moments, including one last save in the final second of the game to preserve the lead.

Kyle Turris had opened the game’s scoring at 5:19 of the first period, firing a one-timer from the top of the right faceoff circle past Howard for an Ottawa power play goal.

Gustav Nyquist responded with a power play goal for Detroit with 3:15 remaining in the period, jumping up to put the rebound of a Henrik Zetterberg chance past Andersson from the slot.

Another power play goal gave the Red Wings the lead as Tomas Tatar’s blast from the left wing was kicked right out to Riley Sheahan in the opposite faceoff circle for a shot into the open side of the net 2:23 into the second.

Detroit scored on two of their six power play attempts while the Senators scored once on four tries with the man-advantage.

Howard finished the night with 23 saves on 26 shots against. Anderson stopped 39 of 43 chances.

The Red Wings were without forward Pavel Datsyuk (groin)… Brian Lashoff was the healthy scratch on defense as Jakub Kindl swapped back into the lineup while Daniel Cleary was the odd-man-out at forward.

On Stephen Weiss and Expectations