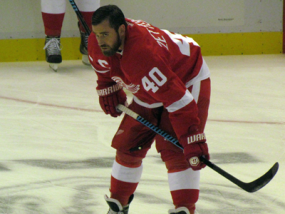 Detroit goalie Jonas Gustavsson made thirty saves in shutting out his former club in his first appearance of the season.

After nearly 65 minutes of scoreless hockey, Niklas Kronwall carried the puck up the left wing boards and fed Zetterberg all along in the slot for a shot that went off Toronto goalie Jonathan Bernier’s stick, off the post, and into the back of the net.

Bernier finished the night with 31 saves on 32 shots against.

With the win, the Red Wings sweep their home-and-home series against the Maple Leafs. They’re next in action on Tuesday when they visit the Montreal Canadiens.

Detroit remained without center Pavel Datsyuk… Forward Johan Franzen missed the game with leg spasms, replaced in the lineup by Stephen Weiss… Petr Mrazek was called up to backup Gustavsson, with Jimmy Howard resting a groin injury… Daniel Cleary was a healthy scratch.