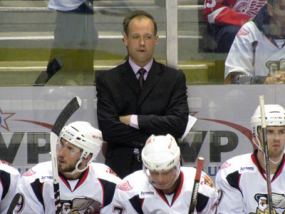 Blashill previously had one year remaining on his deal as the coach of Detroit’s American Hockey League affiliate. With the new contract, he’ll remain with the Detroit organization through the 2016-17 season.

One season removed from guiding the Griffins to a Calder Cup Championship, Blashill has spent three years with the Detroit organization. After one season as an assistant coach to Mike Babcock with the Red Wings in 2011-12, he jumped to the Griffins to be their head coach. Blashill began his coaching career with the Ferris State Bulldogs and then Miami University as an assistant coach. His first head coaching job was for the USHL’s Indiana Ice in 2008-09, then he moved on to the Western Michigan Broncos for a season in 2010-11.

Blashill is a Michigan native and was a goalie for the Bulldogs before starting his coaching career.

With Babcock’s contract with Detroit up next summer, Blashill gives the Red Wings an insurance policy should the current head coach decide to head elsewhere.