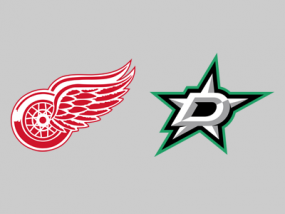 The Red Wings are back home after a 3-1 Western Canadian road trip, hosting the Dallas Stars tonight.

Winning three of four on the road would normally be a good thing but the lack of effort in their 4-2 loss to close out the trip in Winnipeg should be a concern. It was a standard trap game and the first game back home is one as well so we’ll see what kind of team comes out tonight.

Jimmy Howard gets the start for the Wings with Jared Coreau backing him up, having switched places with Petr Mrazek earlier in the week as Jonas Gustavsson remains injured.

Mikael Samuelsson swaps in for Patrick Eaves on the fourth line. Johan Franzen remains out with a mystery injury and Jordin Tootoo, who cleared waivers earlier in the day, will be the healthy scratch.

Kari Lehtonen gets the start for Dallas.

Bonus stupid stat: The Red Wings have met the Stars organization exactly once on November 7, a 5-2 win over the Minnesota North Stars in 1968.