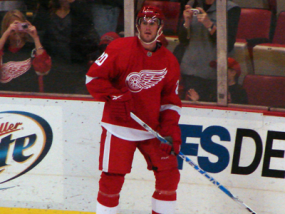 Drew Miller scored the only goal for Detroit on Wednesday as the Red Wings dropped a 5-1 preseason decision to the visiting Pittsburgh Penguins.

Miller avoided being sandwiched by defensemen Brooks Orpik and Deryk Engelland at the Penguins’ blue line but lost control of the puck, giving goalie Marc-Andre Fleury a chance to race out. Miller beat Fleury to it, though, and chipped a shot over the diving netminder and into the vacant net with 7:11 remaining in the middle period to make it 3-1.

It would not be the start of a Detroit comeback, as Chris Kunitz stole the puck in the neutral zone and broke in alone on netminder Petr Mrazek, rifling a shot from the slot past him with 2:34 left in the second.

Kunitz would add another at 9:28 of the third, roofing a shot over Mrazek from in close after being left all alone on a Pittsburgh power play.

Jussi Jokinen had opened the scoring with 4:54 remaining in the first. Jokinen got in behind the Detroit defense at the Red Wings’ blue line and took a long pass from Matt Niskanen, breaking in alone on Mrazek before putting a backhander past him.

Pascal Dupuis made it 2-0 2:29 later taking a feed from Sidney Crosby on a two-on-one before snapping a shot past Mrazek from the slot.

Craig Adams tipped a blast by Evgeni Malkin past Mrazek at 3:14 of the second to make it 3-0 before Miller finally got Detroit on the board.

The Penguins got two power play goals to Detroit’s zero, with each team having three tries with the extra attacker.

The Red Wings wrap up their preseason schedule this weekend, facing off against the Maple Leafs at home on Friday and in Toronto on Saturday.