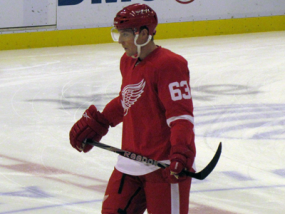 100
0
by Clark Rasmussen
In General News

Andersson made his debut with the Red Wings during the 2011-12 season but established himself in the lineup with Darren Helm injured during the 2013 campaign. In 38 games mostly spent centering the third line, Andersson had three goals and five assists for eight points. He added another goal and four assists playing in all 14 of Detroit’s playoff games.

With Andersson’s signing the Red Wings have only Gustav Nyquist left to sign of their restricted free agents. Unrestricted free agents Damien Brunner and Ian White are not expected to return to the team, while Daniel Cleary’s return depends on the team’s ability to move salary during the exhibition season.

Lidstrom’s Number to be Raised on March 6