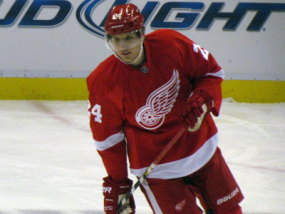 The Red Wings made quite the splash as the NHL’s 2013 free agency period opened on Friday. Here’s the breakdown of what happened:

Arrivals
The big surprise to start the day was that longtime Ottawa captain Daniel Alfredsson would be spurning the Senators and joining the Red Wings for a (presumably) final run at the Stanley Cup. There’s a lot of drama around how he left the Sens but he arrives in Detroit on a $5.5 million deal. The base salary is only $3.5 million, so the final $2 million could apply to the Wings’ 2014-15 cap instead of the 2013-14 one. Alfredsson is penciled in to play the right wing on the second line as Pavel Datsyuk and Henrik Zetterberg will be reunited on the top line.

Centering Alfredsson will be new addition Stephen Weiss. Signed from the Florida Panthers on a five-year deal with a $4.9 million cap hit, Weiss replaces the departed Valtteri Filppula. Detroit won a bidding war with the St. Louis Blues for the onetime Plymouth Whaler. The $4.9 million is a steal compared to the $6 million it was rumored Weiss was asking for.

Departures
As mentioned, Weiss replaces Valtteri Filppula, who signed with the Tampa Bay Lightning shortly after the Weiss deal was announced. Filppula reportedly was looking for first-line center pay and a first-line center role. He’ll be the number two center in Tampa behind Steven Stamkos, making $5 million per season for the next five years.

Though not yet signed by anyone else Damien Brunner seems to be out in Detroit. Red Wings general manager says he expects Brunner to go “in a different direction” for his next deal. The rumor is that Brunner is asking for guaranteed top-six minutes, something he couldn’t get with Detroit after falling to the third line (but having success there) late last season. There has been little buzz on where he might end up.

It seemed like Daniel Cleary was on his way out of Detroit but there are still rumors that the door is open for his return. The Dallas Stars and Pittsburgh Penguins were vying for his services but both teams dropped out. The Anaheim Ducks were also reportedly interested at one point. The Red Wings have continued to be reported as “in” on Cleary, to the extent that at one point it was thought he’d be back in the Winged Wheel by the end of the day. As of right now, Cleary is still on the market.

Defenseman Ian White – who no one expected to return to Detroit – is also still on the market with no apparent suitors.

Grand Rapids
The first of two Griffins-centric came when former Ferris State defenseman Chad Billins signed a one-year, two-way deal with the Calgary Flames. Billins spent all of last season on an AHL-only deal with Grand Rapids and was rumored to be a Red Wings target for a deal similar to what he took with Calgary.

Additional Moves
In addition to being in on Cleary, the Wings are reportedly interested in former Dallas captain Brenden Morrow. This makes absolutely no sense, so I have no idea why the team would be interested.

On top of those moves, the Wings will need to make at least one trade before the start of the season. After all of the RFAs are signed, the team will be maxed out at 50 player contracts and have 16 NHL forwards. If Cleary or Morrow were signed, there wouldn’t be room to sign all of the RFAs. Trade bait includes Cory Emmerton, Jordin Tootoo, Patrick Eaves, Todd Bertuzzi and Mikael Samuelsson. Samuelsson has a no-trade clause but could be convinced to waive it if the alternative was to be buried in the lineup. The Wings are reportedly in the market for a top-four defenseman on the trade block.