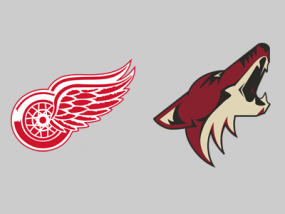 61
0
by Clark Rasmussen
In General

The Red Wings kick off their final three-game homestand of the season tonight, hosting the Phoenix Coyotes in what could be (though we’ve said that for the past three years) the final meeting between the teams.

Detroit currently sits in ninth place in the Western Conference, three points back of the Columbus Blue Jackets but with two games in hand, meaning that if they win out they’re in the playoffs. Failing to claim a single point would mean that they need help, but they can help themselves as they face the current tenth seeded Dallas Stars to close out the season on Saturday.

Dallas is currently tied with the Red Wings but has played one more game. The Coyotes are two points back in eleventh.

The only lineup change the Wings are going with from Saturday’s loss in Vancouver is Patrick Eaves swapping in for the injured Drew Miller. Miller suffered a broken hand against the Canucks and is expected to miss four to six weeks, at which point the Wings’ season will likely be over.