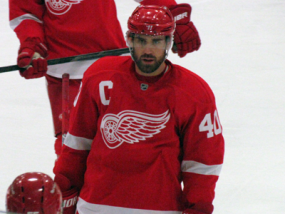 Henrik Zetterberg and Justin Abdelkader each scored twice for the Detroit Red Wings on Saturday night, leading the team to a 5-2 win over the Vancouver Canucks.

The Canucks opened the scoring a team-record six seconds into the game. After Vancouver won the opening faceoff, Detroit defenseman Brian Lashoff pressured and left an opening for Daniel Sedin and Alexandre Burrows to advance on a two-on-one. Niklas Kronwall failed to cut off a cross-ice pass from Sedin to Burrows, who rifled a shot from the inside edge of the right circle past Red Wings’ netminder Jimmy Howard.

Pavel Datsyuk’s bank shot 6:08 in got the Wings on the board. Datsyuk threw the puck on net with Abdelkader driving to the edge of the crease, banking it off Abdelkader’s skate and in behind Vancouver goalie Roberto Luongo.

Datsyuk set up the goal that put the Red Wings in front with 6:03 left in the second period. He gathered up the puck at the bottom of the left faceoff circle after an initial Red Wings chance and threw it to Zetterberg in the slot for a snap past Luongo for a power play goal to make it 2-1.

Zetterberg would score just 1:20 into the third period to extend Detroit’s lead, one-timing a feed from Valtteri Filppula past Luongo from the top of the right faceoff circle.

Daniel Cleary make it 4-1 at 5:57 of the third on a smooth passing play with Damien Brunner and Joakim Andersson. Brunner gained the Vancouver zone and cut into the high slot before passing off to Andersson on the left wing. Andersson sent it all the way across to Cleary at the top of the right circle where he snapped a shot past Luongo.

Detroit’s scoring was rounded out with 5:16 to play on another Datsyuk attempt that deflected off Abdelkader and in for Abdelkader’s second goal. Datsyuk lofted the puck from the right wing towards Abdelkader as he cut to the net. The puck went off Abdelkader, bounced around off of Luongo, and eventually dropped into the net for a goal that had to be confirmed by video review.

Off the rebound of a Burrows deflection from in front, Kronwall knocked the puck past his own goalie to round out the scoring and give the Canucks their second goal with 2:38 remaining.

Zetterberg’s first goal was the only power play marker for either team on the night. Detroit had three power plays and Vancouver had six, with each team going scoreless on a five-on-three. Jannik Hansen also missed on a penalty shot for the Canucks.

Howard finished the night with 33 saves on 35 shots. Luongo stopped 21 of 26 chances.

Having completed their first Western Canadian road trip of the season, the Red Wings are now off until Wednesday when they host the Minnesota Wild.

Defenseman Ian White was back in the Red Wings’ lineup after Kyle Quincey was injured on Friday night in Edmonton… Gustav Nyquist was a healthy scratch up front, while Kent Huskins continued to be a healthy scratch on defense.