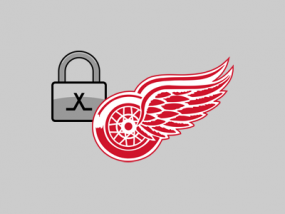 The Games That Weren’t is one of many projects simulating the NHL’s original 2012-13 schedule, lost by the lockout. I’ll be checking in periodically on the fictional Red Wings’ season so we can see what might have been.

The Detroit Red Wings went 1-2 in the fourteenth week of the NHL season, sliding two points further back in the Central Division standings.

The Wings started the week with a 4-2 loss to the Chicago Blackhawks on Sunday. Chicago’s Viktor Stalberg opened the game’s scoring at 7:55 of the first and Patrick Kane made it 2-0 with 5:37 left in the period before Valtteri Filppula cut the lead in half with 54 seconds left. Patrick Sharp put the ‘Hawks back up by a pair just 57 seconds into the second period. Niklas Kronwall cut the lead to a goal again at 9:09 of the third but Marcus Kruger added an insurance marker with 1:38 left. Jimmy Howard made 22 saves on 26 shots in taking the loss.

The Wings headed out west on Wednesday, picking up a 2-0 win in San Jose. Kronwall opened the scoring at 6:08 of the first and Filppula wrapped things up with 5:11 left in regulation. Howard made 21 saves in the shutout effort.

It was on to Los Angeles on Saturday, where the Kings rallied for a 3-2 win over the Red Wings. Detroit took a 2-0 lead off goals by Todd Bertuzzi at 5:10 of the first and Darren Helm at 2:26 of the second. Rob Scuderi got the Kings on the board with 4:25 left in the middle period and Trevor Lewis tied things up just 1:12 into the third. Simon Gagne scored with 2:43 left in the third to break the tie and give LA the win. Howard made 24 saves on the night.

The Red Wings remain in third in the Central Division and sit in sixth place in the Western Conference. They are four points behind the Nashville Predators with four games in hand and two up on the Blackhawks with two games in hand.

Howard’s shutout of the Sharks gave him seven on the season, one more than Jean-Sebastien Gigure of the Colorado Avalanche and Marc-Andre Fleury of the Pittsburgh Penguins for the league lead.

The Red Wings continue their road trip next week with visits to Anaheim, Phoenix, and Vancouver.


The Dawning of The New Era: Zetterberg to Lead Red Wings