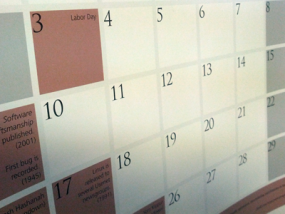 On the Feasibility of a New 82-Game Schedule

Early reports out of today’s meeting between the NHL and the NHLPA state that the league put forth a new offer contingent on an 82-game season beginning on November 2.

The offer is reportedly based around a 50-50 split of hockey-related revenue but I’m going to ignore that right now.  I don’t know if the players will accept an immediate reduction in their share of the pie.  What’s interesting to me is that the 82-game schedule is required.

Of course, the owners will want to make as much money as they can and that means playing as many games as possible.  That’s why we have an 82-game schedule in the first place.

A November 2 start would be 22 days after the originally scheduled start to the season.  If we assume that the games in the new schedule would be played at the same rate as the original schedule, the regular season would end on the first weekend in May.

This roughly matches the end of the lockout-shortened 1995 season, when a 48-game schedule began in January.  That year, the Stanley Cup Finals concluded on June 24, helped by the Devils sweeping the Red Wings in four games.

That lockout-shortened schedule did not feature an All-Star Game, so this season’s schedule could buy back a few days by cancelling the Columbus edition of that event.  Like San Jose in 1995, you’d have to think the Blue Jackets would get rewarded with a future All-Star Game.

That also assumes the games would be played at a “normal” pace and not a consolidated one, as the NBA saw last season.

I don’t know if playing 82 games would be the right thing to do – I’d almost rather see a 72-game schedule, personally – but it fits a previous timeline the NHL has made work.