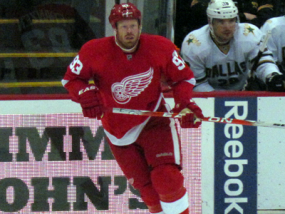 The Detroit Red Wings scored three times in the third period Saturday night, breaking a 2-2 tie to earn a 5-3 win over the visiting Dallas Stars.

The win was Detroit’s fourth in a row after a six game losing streak. It gave them nine of a possible twelve points over their now-completed six game homestand.

Johan Franzen knocked home a loose puck in a goalmouth scramble at 3:47 of the third period to give the Red Wings a 3-2 lead.

Darren Helm tipped the puck past Dallas goalie Andrew Raycroft on a two-on-one with Jiri Hudler at 9:19 of the third to extend the lead, while a Brad Stuart shot from the right point off a faceoff win made it 5-2 just 1:13 later.

Dallas’ Loui Eriksson had opened the game’s scoring with a power play goal at 7:09 of the first period. Detroit netminder Jimmy Howard stopped Trevor Daley’s shot from the point but Eriksson was in close to put home the rebound.

A Niklas Kronwall drive from the top of the left faceoff circle with 2:43 remaining in the opening period got Detroit on the board.

The Red Wings took their first lead of the game when Ian White put a shot from the right point through traffic to beat Raycroft at 3:08 of the second.

The Stars tied things back up with 7:49 left in the middle period. Brendan Morrow was left uncovered as Dallas gained the Detroit zone and was free to snap a shot from in close past Howard off a pass from behind the net by Mike Ribeiro.

Dallas’ first goal was the only power play goal of the night, scored on one of the Stars’ two tries with the extra attacker. Detroit was scoreless on four power play attempts, one of which was only fourteen seconds long.

Raycroft finished the night with 35 saves on 40 shots. Howard stopped 25 of 27 Dallas chances.

The Red Wings are back in action on Tuesday when they visit the St. Louis Blues.

Detroit defenseman Ian White left the game midway through the third period after blocking a shot with his face. He recieved stitches but was otherwise expected to be fine… Todd Bertuzzi remained out of the lineup with a sinus infection… Fabian Brunnstrom and Mike Commodore were the healthy scratches.