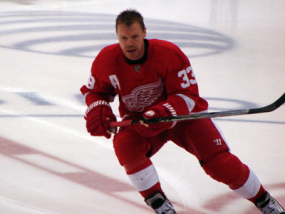 72
0
by Clark Rasmussen
In General News

The Grind Line era of the Detroit Red Wings officially ended on Tuesday, as the famed line’s final member retired.

Kris Draper announced his retirement after seventeen seasons with the Red Wings, finishing his career as one of only five players to play more than 1,000 games in Detroit.

“I never thought I was gonna last this long,” Draper admitted at a Joe Louis Arena press conference, at which he thanked seemingly everyone he came into contact with as a Red Wing.

Draper was acquired by Detroit from the Winnipeg Jets for one dollar on June 30, 1993. En route to the 1997 Stanley Cup Championship, he joined with Kirk Maltby and Joey Kocur to form the Grind Line, a fan-favorite group that also included Darren McCarty.

He will take a currently-undefined front office role with Detroit.