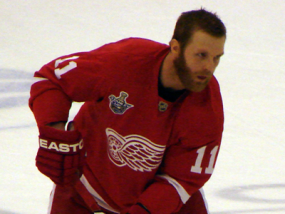 Danny Cleary scored on a shot from the left corner with 6:19 remaining in regulation to break a 3-3 tie. Phoenix goalie Ilya Bryzgalov came off the near post and Cleary’s acute-angle shot deflected off of Bryzgalov’s arm and into the net.

Todd Bertuzzi put Detroit up by a pair 1:53 later when his wraparound attempt deflected off defenseman David Schlemko’s skate and slipped past Bryzgalov.

Patrick Eaves added an empty net goal to finish off the scoring, his second goal of the night.

Detroit had opened the game’s scoring just 3:47 into the first period. Tomas Holmstrom chipped the puck through the neutral zone for Pavel Datsyuk to gain the Phoenix zone. Datsyuk cut latterally through the slot and dropped a pass for a streaking Holmstrom to fling past Bryzgalov.

At 9:46 of the period, Shane Doan gave Phoenix its second lead of the series, winning a battle along the boards and stepping into the left faceoff circle to fire a shot that deflected off of Nicklas Lidstrom and squeaked past Howard.

Eaves scored his first of the night to tie things back up with 1:13 remaining in the opening frame. Darren Helm bowled over Michal Rozsival and Keith Yandle behind the Phoenix net and came away with the puck, coming out to the side of the goal and sending a cross-crease pass to Eaves for a tap-in.

Martin Hanzal put Phoenix back in front just 1:09 into the second. Radim Vrbata drifted across the front of the net with the puck on a Coyotes power play before passing off to Hanzal at the far side of the net. Hanzal buried it into the open goal as Howard dove to get back.

Detroit countered with their own power play goal as Niklas Kronwall buried a rebound chance from the slot after a scramble in front of the net at 4:49.

The Coyotes finished the night with one goal on two power play tries while the Red Wings went one-for-three with the extra attacker.

Detroit must now wait for the conclusion of the other first-round matchups to know who they will play in the Western Conference Semifinals.

The Red Wings played without Henrik Zetterberg (knee) and Johan Franzen (ankle). Zetterberg missed all four games of the series while Franzen was a late scratch, having taken the pre-game skate. Mike Modano replaced Franzen in the lineup… Jakub Kindl was a healthy scratch on defense.