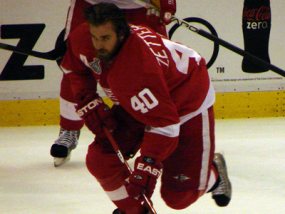 Henrik Zetterberg scored twice Wednesday night, including the game-winning goal, leading the Detroit Red Wings to a 3-2 win over the Washington Capitals.

Brian Rafalski, returning to the lineup after missing eight games with back spasms, assisted on all three goals as the Red Wings ended the Captials’ winning streak at nine games.

Zetterberg opened the game’s scoring with 7:37 left in the first period, taking a pass from Rafalski and one-timing a shot from the high slot past Washington goalie Michal Neuvirth.

The Caps responded just 33 seconds later, when John Carlson’s one-timer from the top of the right faceoff circle went through a screen and past Detroit netminder Jimmy Howard.

Valtteri Filppula put the Wings back out in front with 5:15 left in the opening frame, tipping a Rafalski chance from the point past Neuvirth.

Alex Ovechkin knotted the game back up at 5:53 of the second period, snapping a shot from the high slot between the legs of defenseman Brad Stuart to beat Howard.

Zetterberg’s game-winner came at 9:57 of the third period. With the Red Wings on a power play, Zetterberg drove to the net along the goal line and lifted a backhander off the side of Neuvirth’s mask and into the net.

Detroit finished the night one-for-two on the power play. Washington was scoreless on four tries with the extra attacker.

The Red Wings return to the ice on Thursday as they visit the Columbus Blue Jackets.

Patrick Eaves and Drew Miller were healthy scratches up front for Detroit… Defenseman Ruslan Salei was given the night off to visit his pregnant wife in California… Goaltender Chris Osgood did not return to the lineup as expected, citing soreness after the team’s morning skate.